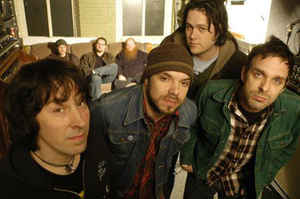 Formed in 2005 by guitarists and singers Brian Vanderwerf and Jesse Tomlinson, from Twin City contenders the Midnight Evils, as a rollicking but conventional two-guitars-bass-and-drums lineup, Chooglin’ made their official debut in November 2005, opening up for Reigning Sound and the Detroit Cobras. The full Chooglin’ line-up—Vanderwerf and Tomlinson on guitar and vocals, bassist Jeff Johnson (since replaced by Paul Diorio), drummer Shawn Walker, trombonists Harold Longley, Steve Erickson, and Zach Zins, and trumpet player Bob DeBoer—was soon unleashed on an unsuspecting public in a round of now legendary high-octane live shows.