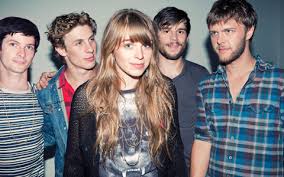 Givers is an indie pop group from Lafayette, Louisiana. The band is made up of vocalist and percussionist Tiffany Lamson, vocalist and guitarist Taylor Guarisco, and bassist and guitarist Josh LeBlanc. The band’s origins date to Hurricane Katrina in 2005, which displaced Lamson and Guarisco from their New Orleans apartment and school, leading them to return to Lafayette with little to do. The duo began playing music together, and they recruited the other members shortly before a last-minute performance at a local pub in 2008. The band came together as the result of the unplanned, improvised jam. The members of Givers have previously performed in zydeco, jazz and Cajun groups. Following a touring stint with the Dirty Projectors and their debut 2009 EP, the band recorded their debut album and signed to Glassnote Records.