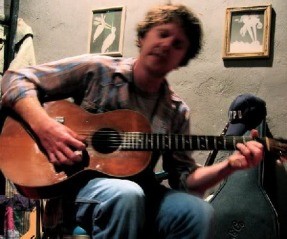 Justin started playing ragtime and country blues guitar at the age of sixteen after being given a broken Goya with two strings which he played for a week straight till he got it fixed and found that you could do way more with six strings than two. After a few years of playing old songs from the 20s and 30s and living out of shacks and cabins in the country, he discovered such modern music as Palace Brothers and Songs: Ohia and began to appreciate the beauty in simplicity and space he found in that music. By 2002, this sensibility resulted in a record of songs called Sandrock Hilton, named after the trailer that sat on the ridge near his treehouse in the woods in Amesville, Ohio. Justin continued to make and record music in rural settings (barns, shacks, empty farmhouses) and released Traveler’s Rest in 2004.